Welcome to Greece’s most famous cosmopolitan island, a whitewashed paradise in the heart of the Cyclades. According to mythology, Mykonos was formed from the petrified bodies of giants killed by Hercules. And did you know that the island took its name from the grandson of Apollo, “Mykonos”?

Set out on a journey to discover a fascinating world where glamour meets simplicity. On Mykonos, VIPs, celebrities, college students and families mingle together to celebrate the Greek summer. Whether you are an entertainment junkie out for a real good time, or a visitor who wishes to explore the island’s history and tradition, Mykonos will certainly meet your expectations.

In contrast to other Cycladic capitals, the capital town (Hóra) of the island is not built in the shape of an amphitheatre but instead spreads out over a wide area. It is one of the best examples of Cycladic architecture and a spellbinding attraction for visitors. Stroll around its narrow marble streets and admire whitewashed houses with colourful doors and window frames, bougainvillea trees in purple bloom and hidden churches. Pay a visit to the church of Panayia Paraportiani, the Town hall and the castle situated above the harbour. Don’t forget to visit the Archaeological, Folklore and Maritime Museums to take in a little history. Wander around the pedestrian shopping streets of the Hóra, always colourful and busy. The most glamorous of all is Matoyánni Street, lined with brand name stores, charming cafés and stylish restaurants. 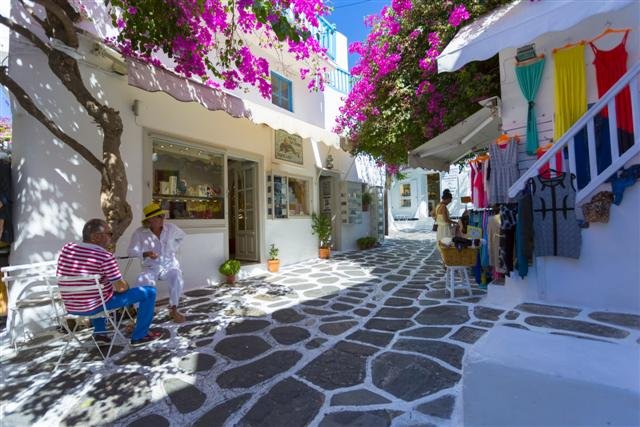 Soak up the atmosphere along the lively waterfront and admire a fleet of fishing boats casting colourful reflections in the azure waters. This is where you will find the Kazárma building, which served as accommodation for the soldiers of Manto Mavrogenous, a heroine of the Greek Revolution. The first floor served as her personal residence. While you’re out strolling, don’t be surprised if you come across the official mascot of Mykonos, which is nothing other than a… pelican! Pétros the Pelican was found by a fisherman after a storm in 1954, and eventually became the locals’ companion. When he died, the grief for his loss was so deep that a replacement was soon found. In honour of Pétros, the locals have established a long tradition of pelicans wandering around the waterfront as an essential part of everyday life. So, whatever you do, don’t forget to take a picture with the successor of the famous pelican Pétros!

One of the most scenic corners of the island is Alefkántra or “Little Venice”, an 18th century district, dominated by grand captains’ mansions with colourful balconies and stylish windows. With balconies perched over the sea, pictures of the famous Italian city spring to mind. Relax at a waterfront café and admire the view of the quaint windmills standing imposingly on the hillside above, set against a luminous blue backdrop. 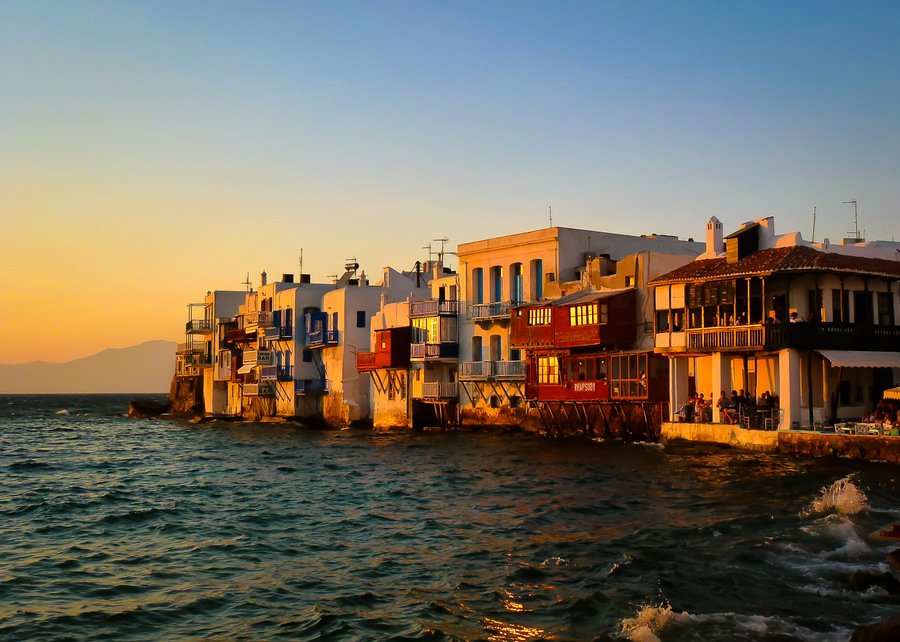 The second traditional settlement of Mykonos is Áno Merá, situated around the historic monastery of Panayia Tourliani (a 16th century church with a brilliant carved wooden iconostasis). To the north, in Fteliá, lies an important Neolithic settlement, and a 14th-13th century BC Mycenaean tomb.

Using the Hóra as your base, set out on a trip to discover the beauties of the island, in particularly its sun-kissed beaches. Along the southern coast you will find a great selection of the most cosmopolitan ones. Here, wild parties keep the crowds rocking day and night. Paradise and Super Paradise may already be familiar to you. Órnos and Psaroú are favorite spots for families. Try a visit too to Platis Yalós, with a well-organized beach where you can soak up the sun lazing on a sun lounge. However, if you are looking for a serene beach to unwind with a book, pick a less organized one on the northern coast of the island, like Ayia Ánna, Houlákia, Kápari, Agrári and Ayios Stéfanos.

Mykonos is the top destination for active and crazy nightlife in Greece. The island boasts the best party scene in the Cyclades, with modern vibrant Mykonos clubs and exciting beach clubs. Presenting a cosmopolitan and fun atmosphere, clubs in Mykonos are trendy, play great music of all types, mainly dance hits, and do not close before dawn.

Wild parties are organized in all Mykonos clubs, which include gay and mixed venues, organizing drag queen shows. Most nightlife action takes place in the beach clubs, scattered around the island on the most popular beaches. Celebrated Mykonos clubs, the most famous located on Paradise beach, Super Paradise beach and Psarrou beach, organize raving parties all day and night long. 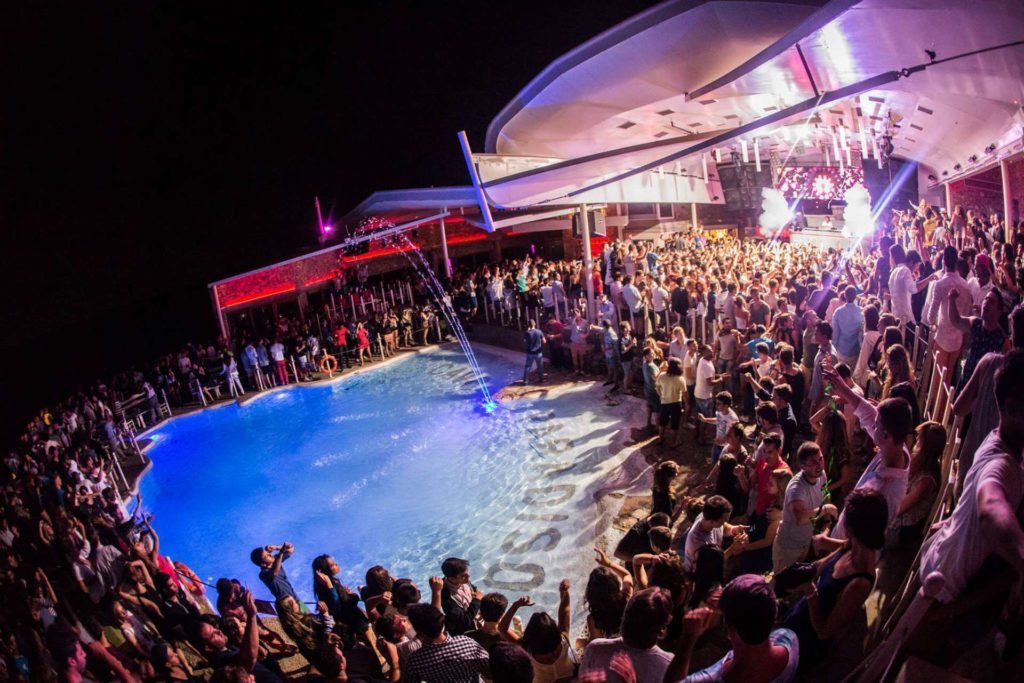 In Mykonos Town, there are also lively clubs to drink and dance. More lounge options are found in Little Venice, Mykonos Town, at the wonderful beachfront.

The island is a paradise for water sport enthusiasts! It is only natural that the “Island of the Winds” should attract surfers and sailors from all over the world! There is a great choice of beaches for windsurfing; however, the most secluded ones are considered to be the best. Choose from Kórfos, Fteliá, Meyáli Ámmos and Kalafátis, where surfing lessons are also available. Play tennis or mini golf at Ayios Stéfanos, beach volleyball at Ayia Anna or try sea parachuting or jet skiing at Eliá or Kalafátis. Diving fans can do a little exciting exploration of the underwater magic of Mykonos. September is thought to be the best month for diving, as the water is warm and visibility is good down at the seabed. 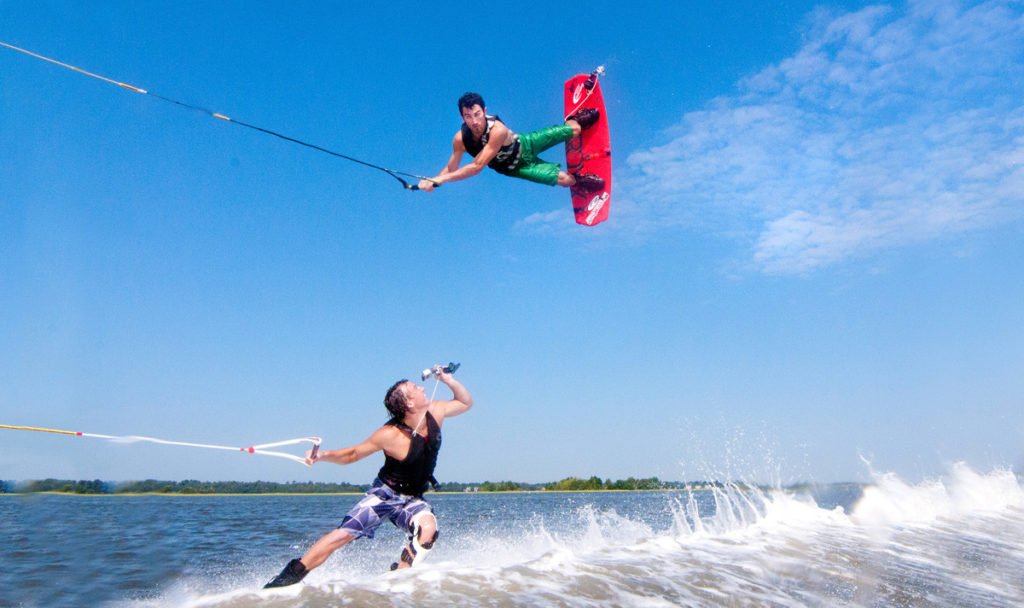 On the island you can find many well-organized diving centers (some of them also offer snorkeling lessons) and stores specializing in diving equipment. Explore the island on a caicque or a boat and discover secluded beaches, or take a boat tour around the nearby islets, which are also ideal fishing spots!

Don’t miss the opportunity to treat yourself to some local Aegean specialties! Pepper flavoured kopanistí, a soft cheese seasoned with pepper, is the island’s gastronomic trademark. Try it as a topping on a round rusk spread with grated tomato, a favourite local mezés (appetiser). Meat eaters can sample “loúzes” (cooked pork filet with spices) and tasty local sausages sprinkled with pepper, and local oregano that has been caressed by the sun and dried in the north wind. To finish off your meal you can sample two exceptionally good local pastries, “amigdalotá” (small round cakes with ground almond, rosewater and caster sugar) and honey pie. 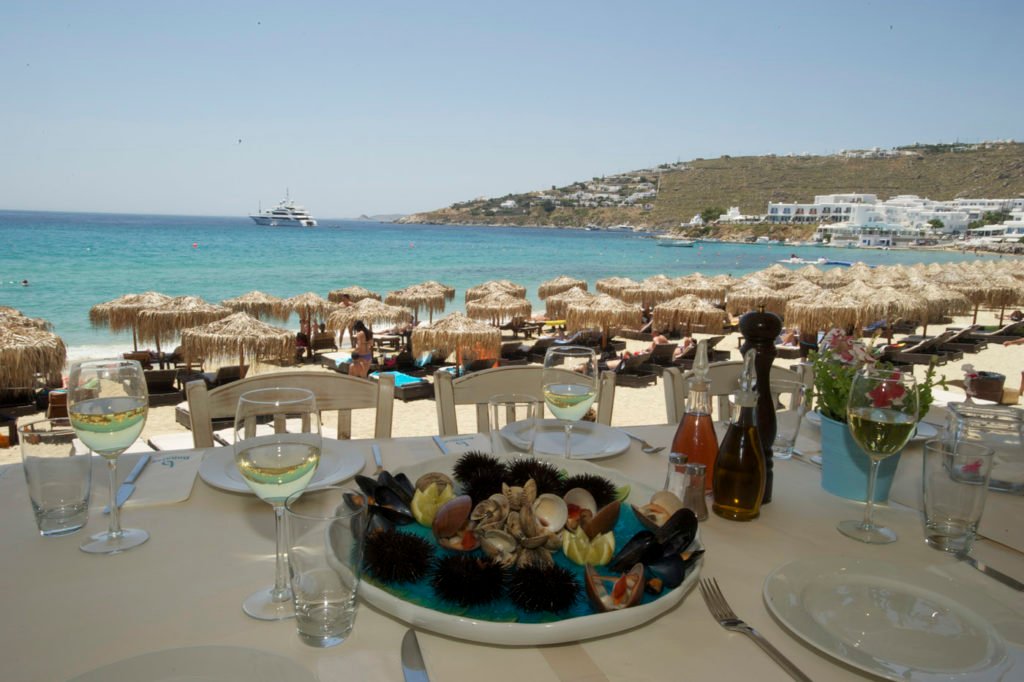